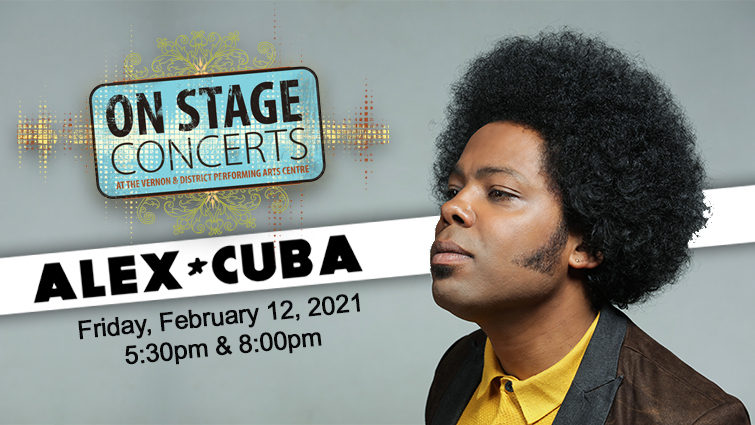 With the audience seated cabaret-style right on the Performing Arts Centre’s main stage, our SPOTLIGHT OnSTAGE Concert Series allows for audiences to relax and enjoy a socially distanced concert in this popular and more intimate performance format.

In keeping with COVID-19 regulations and restrictions, tables will be sold as a 2, 4 or 6 seat unit, placed safely 2m apart.

His sugarcane-sweet melodies, pop-soul hooks and powerful guitar riffs relinquish a conventional stereotype that exemplifies much of the Latin music landscape. Though raised in Artemisa, an hour outside of Havana, Alex Cuba’s artistry is as far-flung as the place he has settled and lived for over fifteen years: Smithers, BC, 14 hours north of Vancouver. His music at once incorporates his roots and is a unique amalgam of styles, having collaborated with artists ranging from Jason Mraz to Ron Sexsmith and Nelly Furtado; and bringing together melodies, popsoul hooks and rock chords in songs that may seem to bear little resemblance to traditional Cuban form.

A forward-thinking, indie-minded artist, Alex has amassed a steadily growing following among critics and fans. With over 20 awards and nominations to his name, including 4 Latin Grammys and two Junos Awards and three Grammy nominations.

Alex carries his Cuba within, incorporating subtle jazz influences, gained from his early years as a bass player in Cuba, and tasteful, sophisticated chords and lyrics expressing his poetry in an undeniably Cuban way. His growing body of work defines a unique musical place in the Latin diaspora.