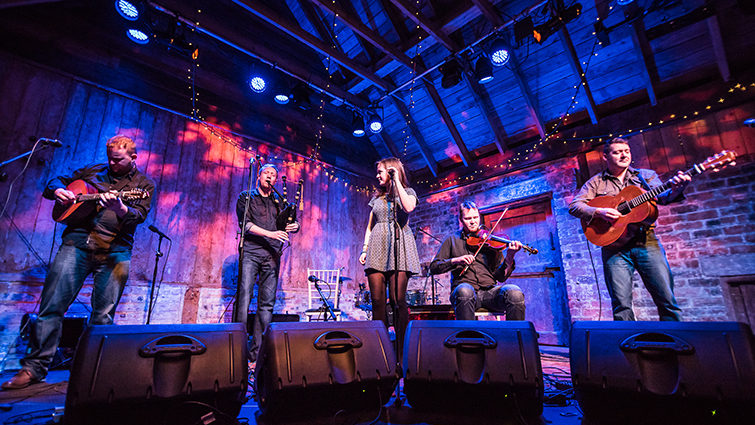 Gaelic Supergroup and un-challenged champions of straight-in-the-eye Highland music are based around West Lochaber and the Isle of Skye. Formed around the turn of the century and taking the name from the Gaelic word for "kinship" Daimh (pronounced Dive) have taken their contemporary take of Highland and Gaelic music to over 20 countries, setting audiences alight from Moscow to San Francisco.

With a reputation as giants of the Bagpipes and Fiddle, Angus MacKenzie and Gabe McVarish remain the lead instrumental force with fellow founding member Ross Martin underpinning the groove on the Guitar.

The Band are joined by "new guy" Murdo "Yogi" Cameron on Mandola and Accordion to complete the instrumental line up.

Daimh have always had the renown and notoriety of working with some of the finest Gaelic singers in Scotland and the current line up only serves to cement that distinction with the addition of the rapidly rising star in the Gaelic firmament, Ellen Macdonald on vocals. Dàimh have carved a reputation from the bedrock of Gaelic culture... authentic Gaelic music with a modern edge and a magnificent range of expression. This could be one of the best Scottish releases of 2014. FOLKWORLD