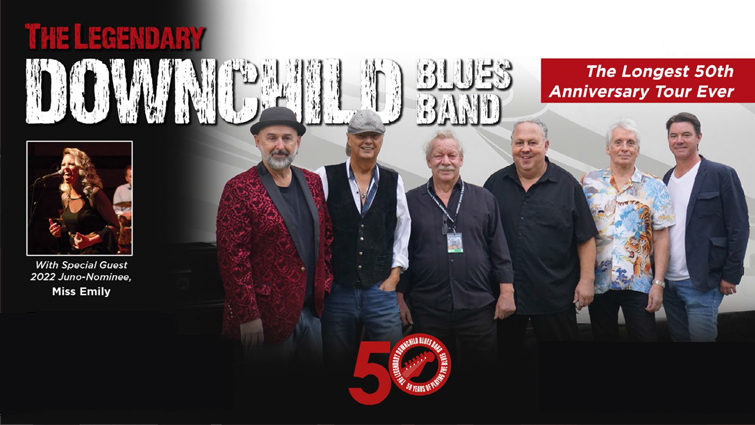 After 19 albums, countless awards and wowing sold-out audiences around the globe, THE LEGENDARY DOWNCHILD BLUES BAND are celebrating over 50 years of playing the blues with a brand-new show featuring their hits like “Flip, Flop & Fly,” as well as fan favourites and hidden gems from throughout their illustrious career. The fall tour is called “The Longest 50th Anniversary Tour Ever” with very special Guest, Miss Emily, 2022 Juno Award Nominee and Maple Blues Female Blues vocalist of the Year.


Downchild came to international prominence as the inspiration for Hollywood stars Dan Aykroyd and the late John Belushi’s hit film, The Blues Brothers. In fact, two Downchild songs, “Shotgun Blues” and “I Got Everything I Need (Almost)” were even covered on The Blues Brothers’ 1978 multi-platinum album Briefcase Full of Blues.

Founder, Donnie Walsh, the band's main songwriter, was inducted into the Canadian Songwriters Hall of Fame in 2019, alongside some of the greatest songwriters of our time, like Leonard Cohen, Neil Young and Joni Mitchell.

Downchild continues to be led by Donnie “Mr. Downchild” Walsh on guitar and harmonica, singer Chuck Jackson, who also plays harmonica, tenor sax man Pat Carey, Gary Kendall on bass, drummer Jim Casson and Tyler Yarema on keyboards.
With their signature jump-blues style and infectious, soulful sound, Juno Award winners Downchild Blues Band, deliver a live performance that is second to none and good times are guaranteed! The 2019 tour to BC sold out at many venues across the province so you are advised to get your tickets early. The Legendary Downchild Blues Band live in Concert with special Guest Miss Emily is presented by the Kootenay Concert Connection.