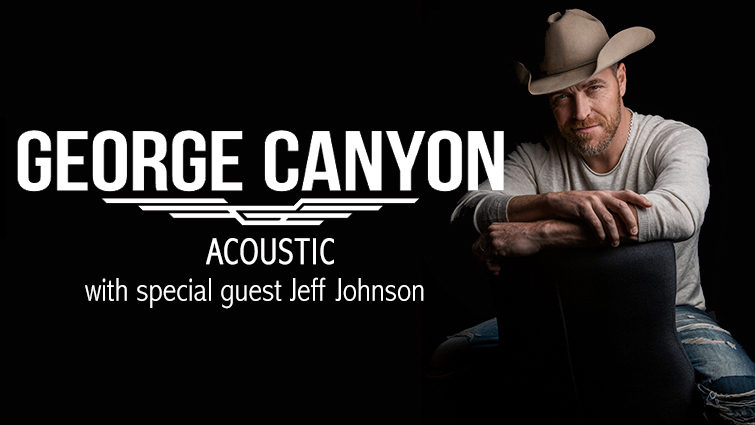 $79 Per Person (Including fees & charges)

George Canyon rose to becoming one of Canada’s hottest Country Music stars in the early2000’s and has won countless accolades and awards, including Juno Awards, CCMA Awards, and ECMA Awards to name a few. He has been inducted into the Nova Scotia Country Music Hall of Fame, recorded 12 albums, and was presented a certified Platinum Award for his debut album ‘One Good Friend’.

With country iconic hits like Just Like You, I Believe in Angels, Drinkin’ Thinkin’, Daughters of the Sun, I Got This, I Want You To Live, Slow Dance and many, many more, he is also a highly regarded humanitarian, strong supporter of the military, and, most important, a proud father and devoted husband.

Jeff Johnson is a Canadian Country Music Association award winning producer of the year, Juno nominated producer and songwriter of the year and multiple British Columbia Country Music Association award winner including 5-time producer of the year and one-time songwriter of the year. Jeff has co-written and produced two number #1 albums, a gold selling album and a gold selling single in country and pop. Jeff has worked with the likes of Dallas Smith, George Canyon, Joey Moi, Faber Drive, Jet Black Stare, Meghan Patrick, Chris Buck Band, Tyler Joe Miller and many others