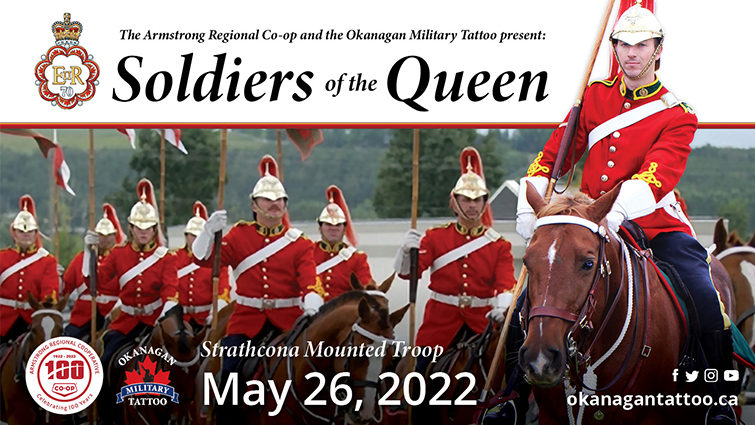 Soldiers of the Queen

Featuring the Strathcona Ceremonial Mounted Troop
Attention! This is a past event, click here to view current event ticket listings.
Armstrong Fairgrounds Thu, May 26, 2022 At 7:00pm
Ticket will be available at the gate until showtime at 7:00 PM.

Soldiers of the Queen

As Canada celebrates the Platinum Jubilee of Her Majesty Queen Elizabeth II, the Armstrong Regional Co-op and the Okanagan Military Tattoo Society are pleased to present “Soldiers of the Queen” featuring the Strathcona Ceremonial Mounted Troop at the Armstrong Fairgrounds on May 26, 2022

The Strathcona Ceremonial Mounted Troop is a ceremonial mounted cavalry unit of the Canadian Army attached to the Lord Strathcona’s Horse (Royal Canadians), an armoured regiment based in Edmonton, Alberta. It is the last surviving military mounted troop in the country.

The troop is designed to be a link to the regiment’s time as a cavalry unit in the early 20th century. The first members of the regiment were trained horsemen who were recruited to serve as match for the Boers in South Africa. The regiment also served with distinction in the First World War as part of the Canadian Cavalry Brigade.

The Ceremonial Troop performed actively in North America from 1923 until it was dissolved in 1939 following the start of the Second World War in Europe. The mounted troop was re-formed in 1974 in time for the regiment’s 75th anniversary and Calgary’s centennial.

In September 2000, the troop mounted the Queen’s Life Guard at Buckingham Palace; the first time a unit other than the Household Cavalry or the Royal Horse Artillery provided a mounted guard in London. It is therefore fitting that the Strathcona Ceremonial Troop be a part of our local Queen’s Platinum Jubilee celebrations.

The May 26, 2022, performance at the Armstrong Fairgrounds will include local pipe bands and other surprise performers.