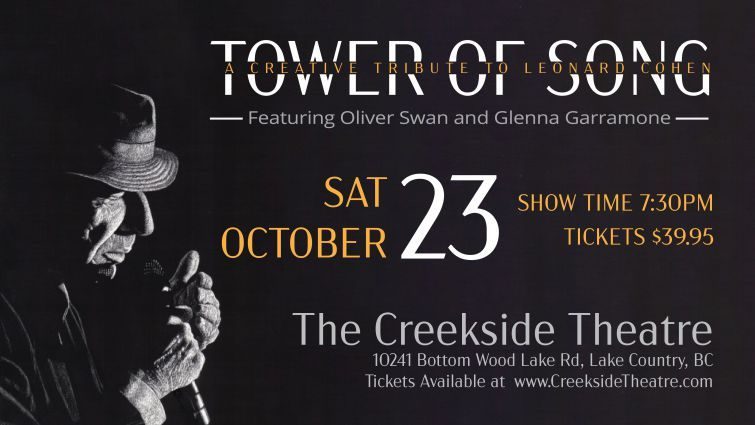 The Tower of Song...A tribute To Leonard Cohen

The music of Canada's greatest bard interpreted by two of Canada's top singer-songwriters.

Tower of Song is a creative tribute to the music of Leonard Cohen, presented by two celebrated BC singers and songwriters: Juno award-nominee Oliver Swain and Glenna Garramone with supporting musician.. A night of rare and classic selections from the Cohen cannon fearlessly interpreted by these artists, with a few original compositions, round out an evening that celebrates Canada's greatest bard and his influence on modern songwriting. Hear Cohen’s timeless songs arranged for two voices, banjo, string bass, piano and guitar. The duo have crafted vocal arrangements of the great works of Cohen that will resonate with both longtime Cohen fans and newer audiences.

This will be a night of exquisite and moving music from one of the world's best...Leonard Cohen:he was one of us.

The following Show have been cancelled.